Lately I've been reading a lot about horse behaviour in the wild and equine ethology in an attempt to understand Starbuck better and try to create a lifestyle which suits us both.  Today I found an article online which I really enjoyed and which seems to be more scientifically based than a lot of the information out there.  It's called The Natural Horse and Unnatural Behaviour and seems written in an attempt to inform veterinarians of normal behaviour so they'll recognize when they're confronted with the abnormal.  Here's a compilation of some of the most interesting bits of information in the article; which I recommend to anyone hoping to understand their horse better. 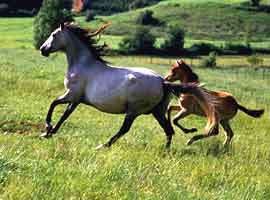 What I've learned (among other stuff):