OK so Daniela my dressage instructor has gone back to Germany and then she'll be in Ireland for the next couple of years - great for her, not so great for me :S  I'm glad I have her video training site to watch for inspiration, and luckily we were able to make a lot of progress before she left :D

But to top things off Starbuck has somehow injured her right shoulder - she doesn't want to extend that leg fully and limps at the trot.  So my vet recommends paddock rest along with 30 minutes of walks daily in addition to the insanely expensive joint supplement Starbuck will be taking for the next month.  Most days we just walk down the road to Sa Fita, where I took those jumping lessons last year, but I figure a little in hand work in mostly straight lines won't be too terrible.  I'm especially careful to not make sharp turns to the right or work on any lateral movements at all so as not to load her shoulder and I'm pretty sure my vet wouldn't be 100% on board, but I figure it's better than her spooking on a walk and doing some of her patented piaffe - rear - buck moves whenever a truck passes / pheasant shoots out of the bush / dog barks close by / leaf falls off a tree.

And since I was able to convince my husband to come take pictures today I have a fabulous collage to share! 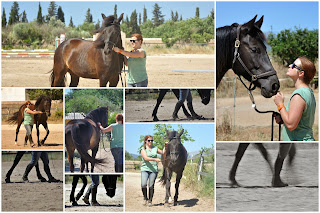 Have a great Sunday folks!
Posted by Starbuck's Human at 8:23 PM No comments: Links to this post

Wow I just realized I hadn't published anything since January (although I had an unfinished draft which I'm publishing today with a fake date) - I knew I was slacking off on the blog but I hadn't realized I was slacking off THAT much.  Here are some videos from last Saturday's lesson with Marina - just to kind of show our progress.  Daniela has me riding with ONE draw / running rein - in case my English equestrian term is off what I'm referring to is a long rein which attaches to the girth between her front legs, then runs up through the bit ring and back to my hands.  This gives lots of leverage and allows me to pretty much force her head down when I want to - for instance if she gets stargazy when her best friend's in the parking lot or for canter departs where she tends to throw her head up, I can bring her head back down.  I know this is not an ideal situation and really hope to be able to get rid of the lot of auxiliar reins soon, but with the videos I've confirmed two things which make me a little bit less apprehensive - for one I'm not riding her behind the vertical except for specific situations (spooks, temper tantrums, etc...) where she herself sucks back and goes behind the bit, and these situations are really not very common at all - I mean this might happen once for a few seconds every three or four rides.  For another, I note that the draw rein is loose a lot of the time, which is what I was going for - to use it only for a few seconds, then drop it again.

The truly important thing that's coming out of all this is not just that Starbuck's learning to carry herself correctly and flex at the poll (although this is pretty awesome), but that I'm learning what it feels like for her to be actively using her hindquarters and "working through the back".  I never really understood this phrase but now I think I'm starting to - there's much more activity (and it's harder to ride!) and I can truly feel the energy coming up from the hind legs, bounding through the back and topline and then cycling back down to my hands through the reins.  And now that I can feel it, I can ask for, identify and reward it promptly and accurately.

And best of all, she's so damn fun to ride these days!  And I really do get the feeling that she herself is enjoying it more now that she's realizing just how strong she is.

Posted by Starbuck's Human at 7:37 PM No comments: Links to this post

So since I haven't posted in so long I wanted to at least leave my thoughts on the last few rides I've had with Starbuck, I think we're really making a lot of progress but I'm not 100% comfortable with how we're making it (think auxiliary reins and spurs).  But I've put an expiration date on the auxiliary reins at least (after March I won't use them anymore) and honestly if one month of artificial aids will solve years of incorrect posture, I'll be pleased as pie.  I'm sure that plenty of folks have the talent and experience to show a green horse how to move correctly without any auxiliary reins or whatever, but I'm pretty sure by now I'm not one of them (yet!).

Saturday 07/03: Lesson with Daniela, rode with makeshift chambon and spurs.  Worked on neck flexions, lots of in-hand shoulder in.  Daniela rode Starbuck at trot and walk (afterwards she was a dream to ride!).  Taught Starbuck to lower her head when I flex her head to the inside by turning my hand (think about holding a mug, then turning the mug sideways to look at your nails).  When she lowers her head, I scratch her withers with my index fingers.  Did lots of transitions and really got the idea of how we should be working.  Lots of trot - canter transitions, and towards the end of the session she was cantering with her head held low.  And no spooks!  At the end of the session Dani taught me the aids for in-hand pirouettes.

Sunday 08/03: Rode with Amanda and Virginia, practicing reprise "Alevín Equipos".  Warmed up with in-hand flexions and shoulder in, then put on the chambon thingy and mounted up.  Rode with spurs again.  Spent the first 20 minutes or so working on my own in walk (shoulder in on a circle then leg yielding diagonally in the other direction), trot and canter attempting to repeat the exercises from the previous day and going over some ground poles at the trot.  Then followed Amanda and Virginia riding the reprise - it's funny how Starbuck's got loads of impulsion when she's trying to catch up with other horses!  Trot was a dream, but canter was very bucky as she wanted to turn it into a race.  We managed to make our transitions in the right places though and even rode by the bar several times without any drama.  Cooled down on a short walk outside the stableyard.

Monday 09/03: Got to the barn late after work, longed with only a rope halter focussing on lowering her head, keeping her moving without constant nagging (Parelli circle game), activating her hindquarters and doing lots of transitions.  Did a few rounds over Marina's yellow and blue cushions and then stacked a few up for a really low jump.  Fairly intense longeing session and I ended by trying out her ground-tying skills while returning the cushions to their place but she spooked with the cushion sounds and raced around the arena a couple of times before I could calm her down enough to stop - I think she was a little afraid of the longe line streaming along behind her.  But we just cooled down for a little longer at a walk and she forgot all about it.

Tuesday 10/03: Went to the barn at lunchtime (yay!), did 15 minutes of in-hand warmups with flexions, shoulder in, turn around the shoulders and then worked on pirouettes - got a few solid steps in each direction.  Put on the chambon (no spurs today) and mounted, worked on more flexions (both to the side and vertical) at the halt and then trying to transition to walk without her throwing her head up.  Shoulder in in walk, then transitions to trot once again trying for her not to throw her head up.  A little heavy at the trot today so after a few minutes I rode several trot - canter - trot transitions to wake her up a little, which helped.  Leg yield in trot across the diagonal, not bad to the left but a little more yucky to the right.  Letting the rein out so she can stretch downwards in trot and then transitioning to canter, but after several tries to not go near a certain fencepost followed by a gnarly spook I pushed her into a more powerful and shorter canter for several 20 meter circles followed by a nice strong trot in both directions.  In the end I let the rein out for a little more stretching and cooled down in walk working on the "head down" aid, halt transitions and a few more flexions.

Saturday 14/03: Rode with the chambon and without spurs - probably because we were in a class setting again with other horses ahead of us Starbuck was really moving along without me having to nag much at all.  We did a lot of flexions at the walk and trot in the class, then did some "carrousel" work where I rode side by side with Cinthya and the gelding she was riding.  This is really hard at first because you have to keep the same rhythm as the other horse+human and keep your eye on them the whole time to make sure you start and end exercises at the same time.  But once Starbuck got over having to work right! next! to! another horse (ears pinned, eyes rolling, butt wandering all over the place) and we got into the swing of things we had a really good time.  It was a highly satisfying ride :)

Sunday 15/03: Went on a trail ride with friends Cinthya, Amanda and Virginia - Starbuck really behaved well and didn't spook much more than the other horses.  With Daniela's OK, I took her out without the chambon and she kept her head down most of the time (it helped that she was trying to snag grass and daisies along the way).  We changed position with the rest of the riders pretty constantly and worked on some leg yielding and shoulder-in back and forth across the path along the way.  A couple of almond trees had even left some of their blooms on for us to enjoy.

Monday 16/03: It had rained all morning so I just longed her with only the rope halter in the arena at the top of the parking lot (the sand is more like really fine gravel and doesn't get slippery like the regular arena).  She was really full of beans especially when her friend Coco who was grazing nearby got taken back to her stall.  So lots of bucking and racing and bunny-rabbit galloping until with changes of direction and gait and speed I got her attention back and we could get back to work.  But honestly it just wasn't the right day for "precision" work so mostly just did lots of trot-canter transitions and worked on keeping her attention, then ended with lots of changes of direction (this ends up being like a quarter pirouette if we do it right) and some shoulder-in at the walk.

Today 17/03: Starbuck got shod this morning and I try not to work with her when she's just been shod.  So just went out to the stable on my lunch break, fed the cats and let her graze in a makeshift paddock for a while while I watched her.  What a great way to disconnect from the office.

Got new boots by the way!  They're synthetic, we'll see how they do.  But they were 50% off! :D
Posted by Starbuck's Human at 5:49 PM No comments: Links to this post