Lately Starbuck's been kind of wary about me putting on her halter, I think the problem is that I introduced a new halter and the leg protectors the same day, then put on the surcingle (which she had only worn a couple of times more than a week ago) and did a normal longeing session.  I noticed she was a lot more skittish than usual while training but didn't think anything of it since she was wearing the protectors for the first time.  Now however I think I tried to do too much at once.  In the future I have to try to introduce new things ONE STEP at a time and only when I'm sure that she's assimilated all the previous steps leading up to the new one (in other words one new piece of equipment at a time and that only in combination with other equipment or training she's 100% used to). 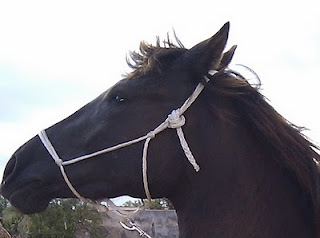 Now I have to try to get back to where we were with the halter about a week ago, where she would come up to me without shying away and almost voluntarily put her nose in the halter.  How to do it?  My plan is to make sure that she associates the halter with "good times" as well as work / training, so yesterday I put on the halter, took her down to the tying post and spent an hour just grooming her (therapeutic for me as well!)-- I even gave her a haircut, taking an inch or two off her tail and giving her a bridlepath.  Then we took a nice relaxed walk around the stable grounds (working on her not getting ahead of me when she spooks) and I led her back to her paddock for her post-training treat.

We'll see tomorrow if there's any improvement, if not I'll just keep including "spa days" every now and then to gain back her trust on this.
Posted by Starbuck's Human at 7:55 AM