Lately Starbuck has been getting much cooler about me lifting her hooves, so I finally decided she was ready for the farrier to give her her first hoof trim.  So I called a farrier, Xisco, who I've seen working before with other horses at the barn; I chose him because he's really calm and takes his time in order to make it a completely stress-free experience for the horse, because the hooves he works on are nicely formed and healthy and also because he doesn't mind explaining what and why he's doing.  But even so I was worried about Starbuck behaving herself, so I got to the barn early and did some roundpen work with her before Xisco arrived.

As it turns out I had absolutely nothing to worry about-- Xisco was really patient and let Starbuck get used to the idea of him doing wierd stuff to her hooves, and Starbuck just went along with it apart from lots of curiosity and a little bit of resistance at first.  The farrier said her hooves were healthy and correctly formed except for that she's a little toed out.  He took some extra height off the outside quarters to compensate but recommended that I shoe her.  At first I had planned on not shoeing her until I started taking her on long trail rides and using boots for at least the first year, but I guess I'll do some more research...

The best part was that since Starbuck stayed calm and unstressed the whole time (at the end of the session she had her head down and lower lip totally relaxed while Xisco rasped her hind hooves!), I know that every time she gets a trim she'll be even calmer!  What a good, brave girl!!!  At any rate I wanted to immortalize the moment; so here are the photos: 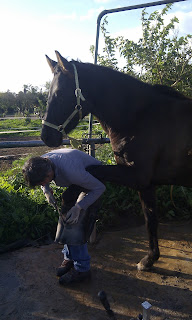 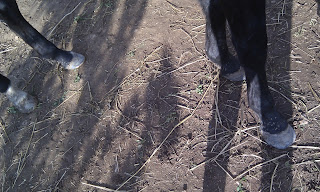 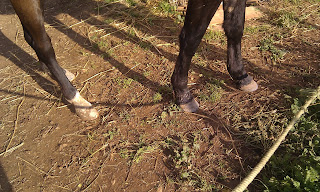 Posted by Starbuck's Human at 2:15 PM