Today I saddled up Chico, a former trot racehorse, and decided to get some riding practice, so my friends Virginia, Carolina and I (I actually just realized what a coincidence their names are) rode out to explore the country roads which wind through the almond and orange groves surrounding the stable grounds.  The weather was gorgeous and we had a really nice ride, culminating in a wild race across a nearby field.  Man, can that horse trot!  We were already going faster than Carolina's horse before Chico even broke into a gallop!  It was lots of fun and I was glad to be back in the saddle, and although I kept wishing I was with Starbuck but I guess that time will come soon enough... 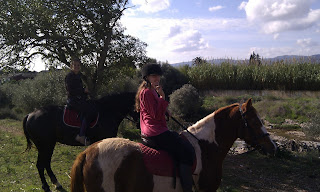 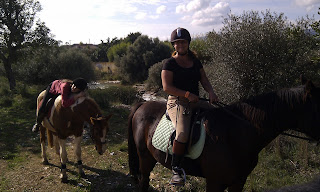 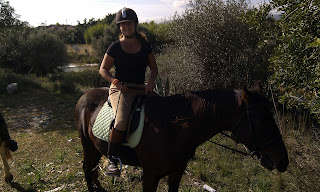 After we got back to the stable I took Starbuck out to do a little longeing and get her a little more used to the bridle-- I used the rope halter for so long that she actually responds better to the halter than to the bridle.  So we worked on longeing and then on lateral flexion, just giving to light pressure on the bit to the right and left.  We also did a little porcupine game to practice moving first her hindquarters and then her shoulders away and finally we even achieved a few sidepasses by combining the two cues... fantastic!  All in all it's been a really positive weekend... just what I needed after a couple of weeks of what seemed like a frustrating lack of results.

I actually have read many many times that often horses will get worse shortly before getting better, so I guess I shouldn't be surprised... also last week was heat week so it was normal for her to be a little PMSsy.  Anyway, here's a video of us working today (thanks Carolina!!!), enjoy!

Posted by Starbuck's Human at 6:11 PM