Today I wanted to try something a little different so I got out the tarp I use to cover my bale of hay and decided to sack Starbuck out with it.  First I put it on the ground in her paddock and she went right up to it, sniffed it and walked right over it on her own!  So I led her over it a few times and stopped on top of it, then backed her over it until I was satisfied that she was 100% cool and wouldn't suddenly decide it wanted to eat her.

Then I folded it up into a little square and rubbed it all over her body, unfolding a little bit every time she got comfortable with the previous step.  This is where we called it a day since it was getting dark and they were about to bring around supper (good luck to me trying to get her to do anything with the feed cart coming by)!  But we got up to the last fold, with the tarp folded in half and she let me rub it all over her including putting it over her head, under her belly and around her feet... tomorrow is a bank holiday in Spain so we'll work on this some more until she's all the way cool with the whole unfolded tarp.

Thanks to barn buddy Miguel for the photos!!! 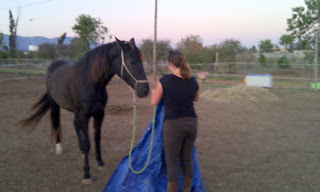 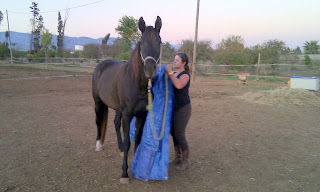 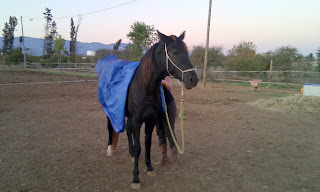 Posted by Starbuck's Human at 8:54 PM