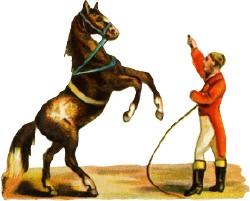 When I first started thinking about working with Starbuck, there was one thing which I kept wondering.  How can I get her to do what I want her to do?  And what's more, how to make sure that she always does it when prompted by a hopefully invisible cue?  As with pretty much everything in this world there are different methods and different opinions, from brute force or tiedowns and habit (like this little guy above) to using treats or a clicker for positive reinforcement.  However the trainers whose methods most appeal to me (John Lyons, Monty Roberts, Elizabeth de Corbigny, Ron Meredith, Clinton Anderson or Pat Parelli to name a few) have found that negative reinforcement seems to be the method that horses find most logical and easy to follow.  In this post I'll try to condense some of their ideas in a way which seems to me to be simple to understand. Although the phrase "negative reinforcement" sounds like punishment whereas "positive reinforcement" is the giving of rewards, nothing could be further from the truth.  Wikipedia defines negative reinforcement means "the taking away of an aversive stimulus to increase certain behavior or response" and as a matter of fact the above mentioned trainers counsel against ever punishing a horse unless they're being agressive towards you.  In the case of horse training, the aversive stimulus is pressure, for example from a rein or your leg if you're riding or from a rope, your hand or a crop if you're on the ground.  So what you do is set up a situation where the pressure you create is logical to the horse and as soon as they even so much as try to do what you want them to do, release.  Then you repeat until the pressure becomes a cue that the horse will respond to every time you give it.  Once a cue is truly learned and the horse is never permitted to ignore it, the horse should respond in any situation no matter how stressful or unusual. 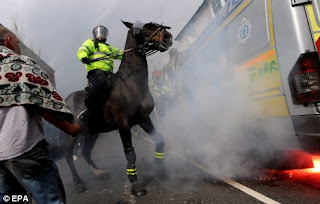 A good example is what I'm currently teaching Starbuck, which is to yield her hindquarters (turn her back legs in a circle while keeping her front feet in more or less one place-- this is an important building block skill for the one-rein stop as well as lateral movement).  So what I'm doing is first flexing her head toward me slightly and then putting pressure on her side with the back of my hand (more or less where the foot is in this image): 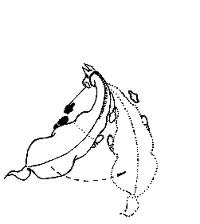 At first I use extremely light pressure then increase by stages (Pat Parelli calls these phases "Fly, Mosquito, Blackbird and Eagle") until I'm using a slightly annoying pressure that she can't ignore for very long.  As soon as I get the result I want, I immediately remove the pressure by taking my hand away.  The first times we tried this, I released as soon as she even shifted her weight away from the pressure so she would know she was on the right track.  After she got consistent at taking one step with light pressure I started asking for more steps before releasing and now we're up to about half a circle.  Eventually I'll work up to a full circle, then will start working on asking her front legs to lift and lower in the same place and finally will try to do this in more and more strange or stressful surroundings.

The most important thing is to apply pressure gradually but release immediately, that way the horse not only learns to do what you ask but to do so with the lightest pressure (cues) possible.  As a matter of fact, after she's done well for about 10 - 15 minutes I reward her in the same way by removing any psychological pressure and letting her take a little break.  And the best thing about it is that it's a method which can be applied in any situation whatsoever: for instance if I'm trying to use a fly spray and she's jumping around I maintain the fly spray near her until she calms down and stands still, then take it away, thus "rewarding" her for standing still by "releasing" the fly spray. 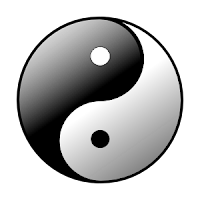 So can the negative be positive?  In the case of negative reinforcement, I would say yes!  Of course, positive reinforcement ("pats on the back") is important too and something I use constantly, but generally after she's figured out how to find her release :D
Posted by Starbuck's Human at 8:25 AM