Today Starbuck and I lunged for a while and I thought she did really well, it was actually pretty funny because another girl at the stable who didn't know that Starbuck is still a baby and was talking about how badly she was behaving ;-)  So we didn't do great today but at least good enough to fool someone into thinking that she's just a naughty grownup!

I also tied her with the other horses while I groomed her and she behaved perfectly, she even lifted her front feet for me while tied!  Another thing I've noticed that she's improved is that she still goes a little crazy on the lunge line every now and then but when she does her periodic farting and bucking and running off thing she doesn't pull me nearly as hard.  Instead of a tug which would pull me off balance before, now she just pulls a little on my arm, which is fabulous!  Every day I can see a little improvement, even if some things get a little worse other things get better.

My friend Virginia even lent me her cavesson (see my Lungeing, Longeing, Loungeing post for more details) which we tried on (I think it fits fine!) and will try out with the line next time.  In the meanwhile here are some photos: 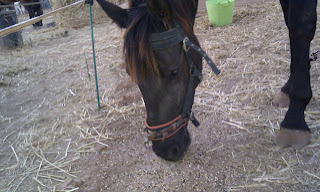 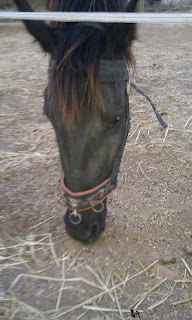 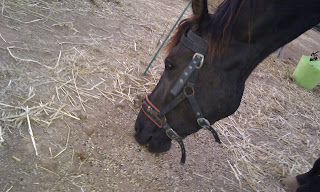 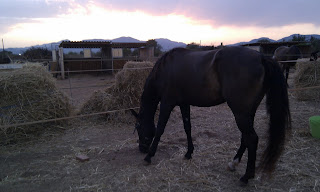