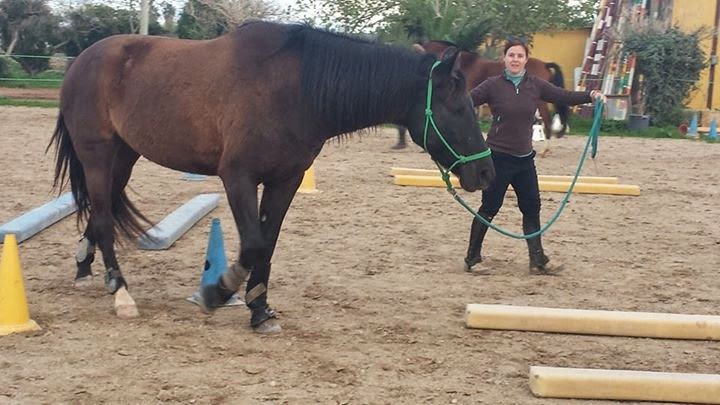 Sorry guys, this is an old post (from December 9th or so) which I wrote and forgot to post.  But I definitely want to post it to remember the exercises so here goes:

Yesterday (well actually about 18 days ago) was a bank holiday in Spain (immaculate conception day, if you can believe that) and since we had hardly any classes last week due to rain, Marina ignored her no-class-on-Mondays rule and gave a regular riding lesson in the morning and a groundwork agility lesson in the afternoon.  I was too busy flying back from Madrid (a nice trip by the way) to go to the regular lesson but I did make it to the groundwork lesson, and boy am I glad I did - we had a great time and I really got some good advice from Marina to put into practice.

We started out with a little longeing to warm up, and then Marina put us to work on a sort of obstacle course she had put together - we had to stay at any of the "stations" long enough to get the horse to go through it correctly, then move on to another one.  If any of the "stations" got to be easy, we had to up the difficulty level by standing farther away from the horse, or doing it in trot rather than walk. 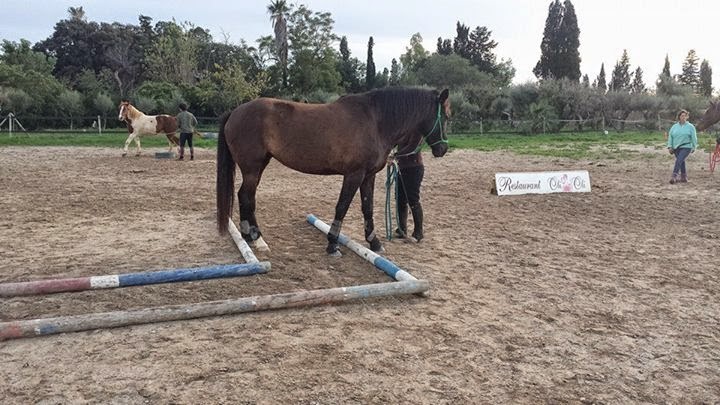 Here's a diagram of the different stations, the smiley face is the person and the green arrows are where the horse is supposed to go.  Below the diagram is a brief description of each station - all of them were to do in both directions. 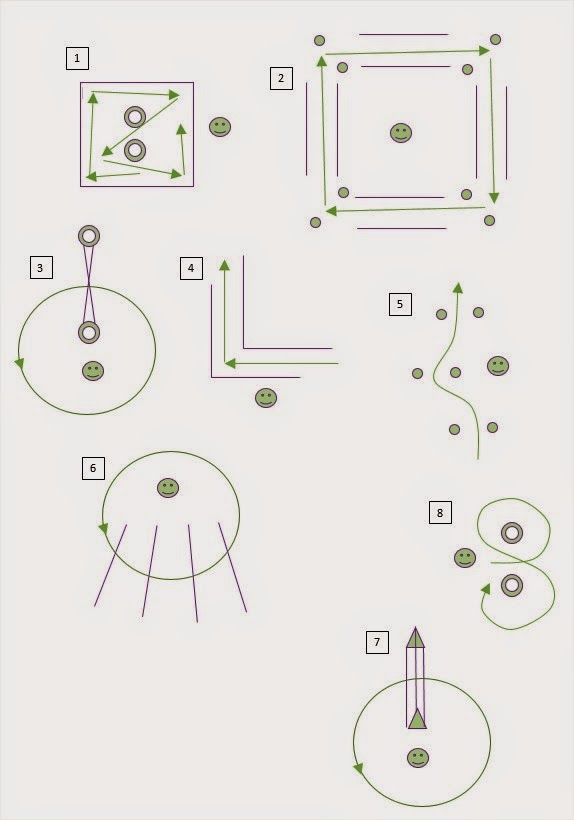 1 - Two tires about 3 feet apart inside a square formed by four jump poles (maybe 8 - 9 feet long each).  The person stayed outside the square, the horse inside.  The horse had to make a complete circuit of the square without stepping outside, then change direction through the two tires.  This was incredibly difficult, we only did it well like 3 times.

2 - This was a larger, partially open square made of the blue and yellow cushion-like training bars with two cones placed in each corner.  The person was inside the square, and the horse had to go around the square between the bars and cones, without stepping outside.

3 - This was a simple low crossrails jump using two tires as the standards.

4 - Parallel jump poles in an "L" shape.  The horse had to go between the two poles without stepping outside, with the person outside the poles.  Starbuck and I even did it backwards a few times.

5 - Three pairs of cones for the horse to walk between, with the person walking alongside.  This was really easy until I tried to get farther (like 3 - 4 feet) away from Starbuck, then it was much harder to get her to go through the cones.

6 - Ground poles to go over in a circle.  Using only my dressage whip and not having a longe whip, it was difficult to keep her at a trot, but we ended up figuring it out.

7 - This is a solid "wall" made out of plywood in an elongated pyramid shape for the horses to jump in a circle.

8 - Two tires about 6 feet apart.  The person stood back about 6 feet away from them and had to send the horse in a figure eight between and around the two tires.  We've done this before so it wasn't impossible, but she would still "skip" a tire every now and then.

The main thing I took away from the lesson was that instead of just "ignoring" incorrect responses and trying again, Marina suggests I try really hard to stop Starbuck before she does the wrong thing and re-set it up so she can do the right one.  For instance, going around the figure eight tires, I often have the problem where I "undersend" and she doesn't quite make it around one on one side.  Until now, I've always simply let her finish and then try harder the next time.  But Marina says that if I see she's going to "miss" a tire, I should stop her, back her up if I need to and re-send her - repeating all of this until she does it right.  And I could definitely tell she was thinking about it and trying to work it out when she finally made it through and I was reminded of an article I read way back when I started working with her, about replacing the flight response with a problem-solving mindset so the horse gets in the habit of thinking before it reacts.  I don't remember who wrote it, but it's definitely something to keep in mind when working with Starbuck.

Marina also recommended that instead of just doing 10 minutes of walk to warm up before ridden lessons, I work on some of these exercises to warm up and get Starbuck focused on me.  I think this is a fabulous idea and am going to try to remember to do it! 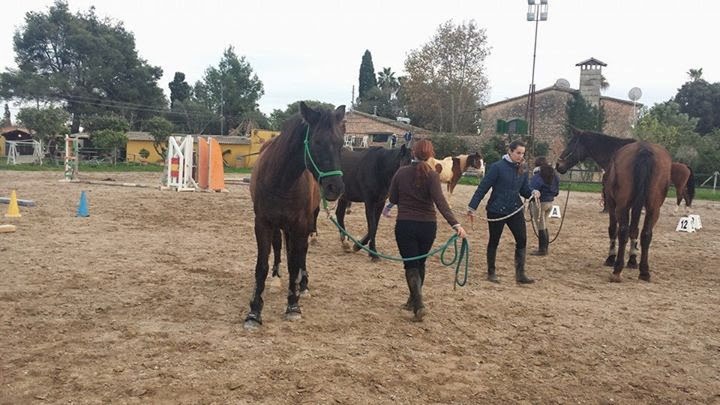 Here and here are two Facebook videos of the lesson (sorry if the visibility's limited, a friend of mine made it), I definitely hope we do more like this in the future.

Posted by Starbuck's Human at 8:29 AM