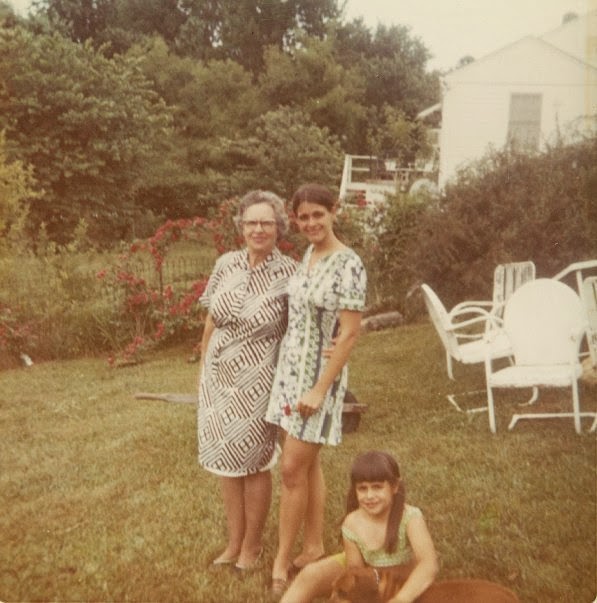 My great-grandmother Gladys was a pretty amazing woman.  Born to a middle class family in a small town in low-country South Carolina, one might have expected her to lead a pretty uninteresting life, but she was determined to live the way she wanted to - travelling to places like Bermuda and pre-revolution Cuba (we still have some of the letters a lovesick Cuban she met while she was there sent her), entering dance contests and marrying a man whose job (a highway construction engineer) would take her all over the state.  And even though she passed away when I was a teenager and as far as I know she wasn't particularly horsey, I still have her to thank (vía my mother) for one of the best pieces of advice anyone could have given me about training horses or life in general.

I don't remember exactly which context it came up in, but years ago my mom and I were talking one day about caring for children - maybe when I was teaching English and had some challenging younger pupils.  I've never been much of a hand at keeping kids in line and my mom is the exact opposite - children are drawn to her and she knows how to maintain their interest so that they aren't even tempted to misbehave in a way which seems downright magical to me.  So when I came to her for help she passed on her grandmother's advice to her from years ago - the three magical words "Try different things".  Of course, at the time this wasn't the answer I was looking for - what I really wanted was a sort of magic bullet to keep kids enraptured with my presence with little or no effort on my part.  But what I realize now is that this attitude was really the problem - if I wasn't willing to expend the effort to try to keep a child's attention, how could I possibly expect them to go the extra mile and pay any attention to me?

I now (thank God) no longer have to deal with children except at holidays and when we have visitors, but those three little words have stuck with me through the years and when I got Starbuck and started reading up on training methods, I was so glad to have that advice.  Because what I've figured out is that although I really respect John Lyons as a trainer and I've learned so much from him, his methods just don't work for us 100% of the time.  Same goes with Pat Parelli, Alois Podhajsky, Carolyn Resnick, Reiner Klimke, you name it.  There are all these books and websites with surefire methods for training horses and I love the fact that all of this is available and am constantly reading up on new training theories and techniques.  But sometimes these recommendations just aren't right for you, or the horse, or your situation, or whatever.  So maybe what ALWAYS works for Carolyn Resnick because she has an amazing sense of timing and great connection with the horse, won't always work for me because I don't have the same talents.  I often find that even the most inspired method from an amazing trainer just isn't working, which can get frustrating until I remember my three magic words and I try different things.  In the end, trial and error takes longer and requires a lot more effort than just sticking entirely to one training method but I learn so much and like to think that I don't waste too much time (or Starbuck's good will) persisting in an attempt which just isn't working.

For instance this bit thing.  I had initially hoped that by using a stronger bit, Starbuck would become more sensitive and reactive to my rein aids so that I could go back to using the hackamore with a light contact at all times.  And this seemed to work great for a while, I've ridden her for a couple of weeks with the butterfly bit and at first it was a downlight delight.  But last week we had a couple of iffy moments culminating in a rodeo ride around the arena at a full gallop with me losing my stirrups and hanging on to her mane for dear life - the only way I could finally get her to stop was when she nearly ran into another horse.  And it's not like I had the reins flopping around, there was a definite strong contact the entire time but she just ran right through it.  And even when she's not freaking out I've noticed her starting to need more contact when she's fired up.  So graduating to a stronger bit?  Not working for us, but no biggie - it's just time to try something different.

So here's my new plan - to keep her guessing I'm going to alternate between the old D-ring snaffle I started her in, the hackamore and the butterfly bit.  No more than two days in a row with any of them for at least a few weeks.  I'm going to work a lot more on activating her hindquarters to keep her from leaning on my hands - the second she starts to get heavy on the bit I give her the aid for shoulder-in or haunches in until she lightens up.  And finally, I have to be really really careful to not give her the kind of constant contact she can "get used to".  We already started yesterday with the snaffle - she was obviously a little surprised by the change but responded pretty well.  There were a couple of scary moments where it would have been much easier to pull on the reins rather than to give her more leg and use less contact, but it worked and she lightened up nicely.  Hopefully in a few weeks I'll be on here complaining about something completely different and this whole running through the contact thing will be forgotten.

And even if we are still working on this weeks or months from now, we'll just keep on trying different things.
Posted by Starbuck's Human at 7:30 PM